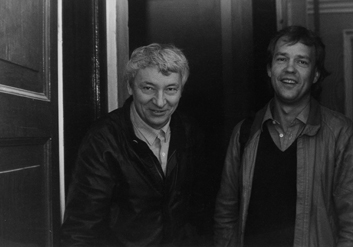 Raimund Girke (1930-2002) practiced his ‘fundamental painting’ with impressive consistency. From the beginnings of his free artistic activity, Girke concentrated on the colour white and examined its endless richness in variety. Through superimposed layers of paint in subtle tones of grays, ochre, and light and dark blues, he created a cosmos of iridescent, light-modulating chromaticity. He traversed the scale of the white color palette in its material versatility between concentration and reduction; he measured the pace of it in an alternation with dynamic and concentrated silence.

A broad retrospective of his opus took place in 1995/1996 at the Sprengel Museum in Hannover, the Von der Heydt Museum in Wuppertal, the Saarlandmuseum in Saarbrücken, and the Kunsthalle in Nuremberg. Girkes 70th birthday was celebrated by the Kunstsammlungen Chemnitz and the Kunstmuseum Heidenheim. Posthumously there were great exhibitions held at the Josef Albers Museum Quadrat Bottrop in 2009 and at the Museum Kurhaus Kleve in 2012. All the exhibitions named above were accompanied by extensive catalogues.

In 1980 we first started working with Raimund Girke and since then we have been realizing many national and international exhibitions for him. Today we are managing the art collection of his widdow Karin Girke and place his work in private and public collections.