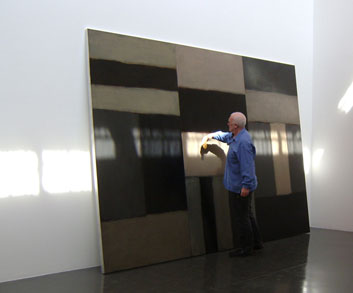 Ever since the 70’s in New York City, Sean Scully (* 1945 in Dublin) has been continually developing one the most important pictorial positions in geometric abstraction. His static compositions assembled using only stripes, bars, and squares, reveal their emotional surge in a dynamic flow of rich colour application and in the frayed painting surfaces which lie underneath and thus reveal the borders of each segment of the painting.

Alongside many single exhibitions and participation at group exhibitions worldwide, the following all organized retrospectives of his oeuvre: the Whitechapel Art Gallery in London (1989), the Hirschhorn Museum in Washington (1995), the Kunstsammlung Nordrhein-Westfalen in Düsseldorf (2001), the Metropolitan Museum of Art in New York City (2006), and  Museum Küppersmühle für Moderne Kunst in Duisburg (2009). The most recent show Sean Scully: Retrospective travelled to Kunstmuseum Bern and Lentos Kunstmuseum, Linz (2012).

Sean Scully lives in New York City, Barcelona, and in Mooseurach near Munich, where he taught from 2002-2007 at the Academy of Fine Arts.