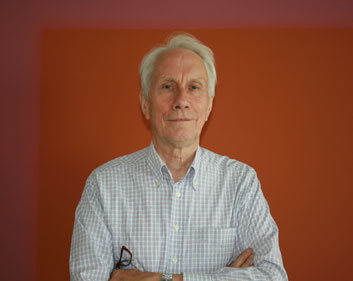 Ulrich Erben, born in 1940, still constantly commutes between his home in the lower Rhine area and Italy where he finds impulses for his painting in the changing landscape’s moods.
He is known as one of Germany’s most successful artists belonging to the movement of Concrete Art; he first showed his white paintings in 1971 in the legendary Gallery in Bochum and also in significant exhibitions such as “Planned Painting” in the Westphalian Kunstverein in 1974 or at the documenta VI in 1977. Ulrich Erben was holder of a professorship at the Art Academy in Münster, Germany from 1980 to 2005.

Today Ulrich Erben’s paintings are part of the most insistent examples of colour focused art. He builds upon its sensual diversity; on its ability to create harmonious corresponding elements as well as contrasts and space.