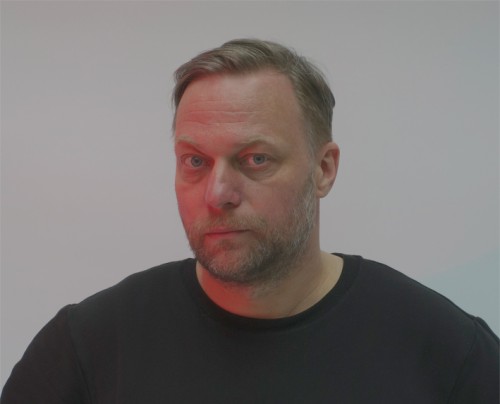 Thomas Scheibitz was born in Radeberg near Dresden in 1968. His parents run a sculpture business and have been working as wood and stone sculptors for several generations. After an apprenticeship as a toolmaker, he studied at the HfbK Dresden from 1991 to 1996, where he became a master student under Ralf Kerbach. Since 2018 he has held a professorship at the Kunstakademie Düsseldorf.

Scheibitz is equally concerned with painting and sculpture. The visual possibilities of abstraction and figuration are dissolved in his own visual language. The origin of the pictures, images, models and their context are examined or further translated. Durs Grünbein writes about Scheibitz’s work: “Scheibitz has experienced the demarcation of the political systems together with their projections and double images, he has jumped into the ditch, the mirrored view of the camps is familiar to him, the spectacle at the interfaces. ” Grünbein writes further: “He works persistently on the opacity of his art. He is not one of the destroyers, but one of the inventors.
“For the artist, art history with its truths, assertions and interpretations is one of the orientations or a kind of foundation for his work. Direct narration in a picture, in painting, is for him a past visual language. For him, the means of creating a picture must stand out from a narrative text. In interviews, he often emphasises that a picture is considered “lost” for him if it can be re-narrated.
The genre of film and music language is also an important, a stimulating and parallel tool for him. The goals remain the edges of invention, whose interactions depend on the experience, instinct as well as a method rather than a style. Landscapes, portraits or still lifes, or their allegories, form the main focus in his pictorial language.