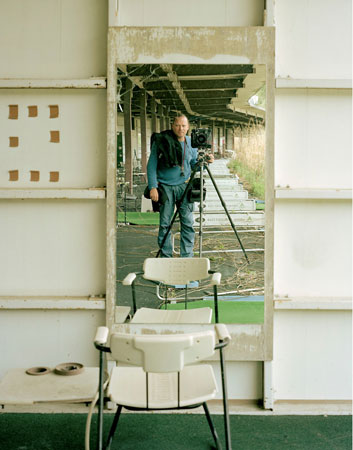 The artificial and the real, deception and reality are recurring themes in Robert Voit’s photographs. What is still real in our world today and what is just scenery? In the series “New Trees”, with which Robert Voit became known in 2010, large-format mobile phone antennas blend into the landscape disguised as trees, cacti or palm trees. This supposed fairy-tale forest is a brutely placed test-tube product in the landscape. Lonely people are lost with their mobile phones, searching for contact with the world. His pictures appear so unreal that it is often wrongly assumed that Voit manipulates his images on the computer. In fact, however, his photographs show authentic sections of our world.

With his black-and-white series “The Alphabet of New Plants” (2005), which is based on Karl Blossfeldt’s book “Urformen der Kunst” (“Archetypes of Art”), published in 1928, Robert Voit once again leads the viewer down a deceptive path, because only at second glance does the viewer realise that these are not real but artificial flowers, which are nowadays mass-produced and used for decorative purposes. But as with the “New Trees”, the deception fails miserably even at second glance, for the unclean contour of a plant stem made of plastic or the fabric structures of the leaves betray man’s failed attempt to copy nature.

Robert Voit’s works are exhibited internationally and can be found in important public and private collections, including the Lenbachhaus, Munich, in the USA at MOCA, Los Angeles, the New York Public Library, the Nevada Museum of Art, Reno, and the George Eastman Museum, Rochester, as well as the Stadtmuseum Munich, the DZ BANK Kunstsammlung, Frankfurt, and the ERES Foundation, Munich.

The artist has already received numerous prizes, including the Sophie Smoliar Award (2000), the renowned European Architecture Photography Prize (2003) and the Photo Prize from the Haus der Kunst, Munich (2004). In 2005, he was the winner of the sponsorship award of the International Lake Constance Conference (2005) and was invited to the Residence de Photographes, Institut Francais d’Haiti and German Embassy in Port-au-Prince (2009) and to the artist residency La Brea Matrix, Los Angeles, USA (2010). With “New Trees” (Steidl Verlag, 2014) and “The Alphabet of New Plants” (Hatje Cantz Verlag, 2015), Robert Voit has presented two highly acclaimed monographs, both of which were awarded the German Photography Book Prize in silver.