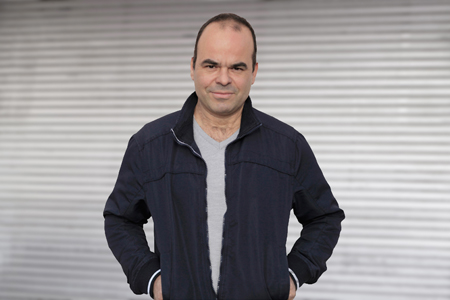 Peter Krauskopf is preoccupied with the process of painting over. All his pictures – the colour-intensive, smaller works on paper and the large-format paintings on canvas in monochrome colour gradients – have one thing in common: they appear abstract at first glance. Yet they are concretisations of a passage of time: on homogeneous, smooth backgrounds consisting either of abraded, multi-layered, formerly discarded images or monochrome underpaintings, the artist performs a single, image-forming intervention. Krauskopf, who always paints with oil on linen or paper, applies a broad, even surface over an already existing imagination with a squeegee or even a brush. This creates a symbiosis between an image of the past and its completion in the present. They combine his “museum of images” in the mind – especially that of American colour field painting of the 1960s, German Romanticism and 17th century Dutch painting – with the painter’s intuition in the here and now.

“Peter Krauskopf convinces with his unbroken creative drive. He is an explorative painter in permanent confrontation with the classical academic concept of painting, always in self-critical research for simplification within the pictorial event,” says Walter Storms, who has represented the artist’s work since 2005. The groups of works created in the course of his artistic career present themselves as logical results of controlled thought processes and questioning of what has gone before. Surprising, inventive painting techniques and the resulting pictorial inventions are an expression of fresh courage and spirit in the abstract pictorial world of Peter Krauskopf.

Peter Krauskopf (*1966 in Leipzig) completed his studies in painting in 1997 at the Hochschule für Grafik und Buchkunst in Leipzig as a master student of Professor Arno Rink. Since then, the works of the Berlin-based artist have been shown in numerous institutional solo exhibitions. In addition, Peter Krauskopf’s works are represented in many public collections, including the Kupferstichkabinett in Berlin and the Galerie Neue Meister, Dresden, the Germanisches Nationalmuseum, Nuremberg, the Berlinische Galerie and the Paul-Löbe-Haus for Members of the Bundestag, Berlin.