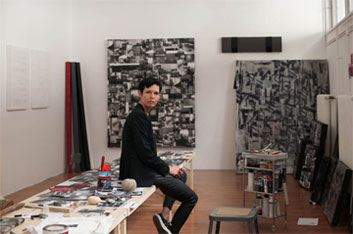 Having studied literature and law in Munich, Caro Jost moved to New York in early 2000, where she opened her studio and project space KUNSTGESEHEN on former gallery premises and began a daily photo-transmission on public screens and the internet lasting several years about her life in New York. While studying at the NYU and the Art Students League, she developed her own artistic technique: STREETPRINTS, works on canvas. Using a special process, she takes real imprints of street and footpath reliefs and in this way captures traces of the past. She had her first exhibitions in New York at, among other, the Goethe Institute, der German American Chamber of Commerce, Alp Galleries and in Washington at the American Institute of Contemporary German Culture.

Since the year 2000, she has made STREETPRINTS in more than 80 cities, including Hong Kong and London, Los Angeles, Istanbul, Helsinki, Moskau, Shanghai, Toronto oder Havanna.

Her literary studies background, especially her grounded knowledge of investigative journalism and forensics, plus her study of fine art constitute the points of departure for her basic artistic theme: the search for traces, the documentation and representation of time, space and events. Since 2000 and parallel to the long-term STREETPRINTS project, she has also been preoccupied with individual series of works and public art projects. In 2014 she made her first documentary film about the former studios of the Abstract Expressionists in New York. Since 2015 she has been involved in her current image sequence called INVOICE PAINTINGS, using archive material from the studios or estates of important artist personalities.

Her works are the subject of film screenings; she has had solo and group exhibitions, in particular at the Museum für Konkrete Kunst, Ingolstadt, Mies van der Rohe Haus, Berlin, Mark Rothko Art Center, Latvia, AmDoc, Palm Spring, Anthology Film Archive, New York, K20, Düsseldorf. She is included in the collections of the Lenbachhaus Munich, the Jumex Collection Mexico, and others.

First collaboration with the Walter Storms Galerie on a catalogue project, followed by a museum presentation in Veszprém in 2008.