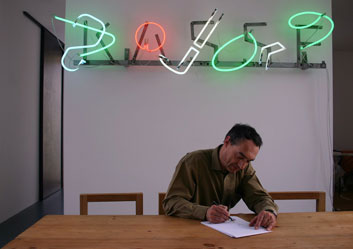 Whatever Albert Hien touches, metamorphoses. Ships sink in firm ground, heating elements emerge as Roman temples, and water gushes out of telescopes. The progress of modernity becomes subject of irony in his installations and sculptures.

Twice Albert Hien took part in the documenta in Kassel (documenta VII and VIII). In 1985 he was able to represent Germany at the Sao Paulo Biennial. Some of his most significant exhibitions were at the Städtisches Museum Abteiberg in Mönchengladbach, at the Josef-Haubich Kunsthalle in Cologne, at the Centro de Arte Reina Sofia in Madrid, and at the Städtische Galerie im Lenbachhaus in Munich which owns several of Hein’s works in their collection.