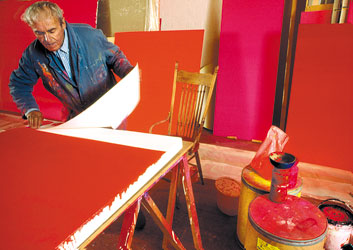 After the 2nd world war Rupprecht Geiger (1908-2009) was a founding member and the theoretical head of the Munich artist group ZEN 49. The doyen of concrete painting centralized his life’s work around the topic ‘color’. By pursuing a consequent formal reduction and clarity the spiritual power of the color itself, which for him had an autonomic value, should be exposed. In 1948 Geiger was already experimenting with non-rectangular canvases, which later became famous under the American expressionists, like Frank Stella or Ellsworth Kelly, as the so called “shaped canvases”. Since the 1950s Geiger had been putting special focus on the color red, about which he said: “Red is life, energy, virility, power, love, warmth, strength. With its ability to stimulate, it has a powerful function.” His oil- and acrylic paintings, works on paper and screenprints are characterized by simple geometrical forms and luminescent, sensitively modulated colors.

Rupprecht Geiger was announced professor at the art academy in Düsseldorf in 1965, where he stayed until 1976. In 1982 our gallery first started representing him and since then we have realized many exhibitions with him and published a multitude of his graphic works. His most important exhibitions held place in the Kestner Gesellschaft, Hannover (1967), the Städtische Galerie im Lenbachhaus, Munich (1978, 1998 und 2007), the Russian Museum, St. Petersburg (1994) and the Neuen Nationalgalerie, Berlin (2008). Geiger participated in the documenta four times and received the important Rubens award of the city of Siegen in 1992. He also represented Germany in the Biennale of Sao Paulo in 2002. The artist died in Munich in 2009.