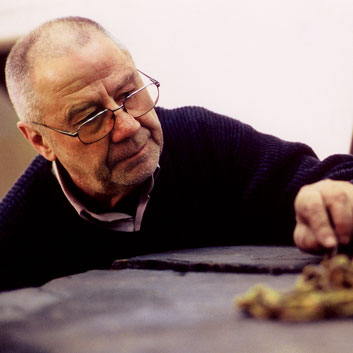 Giuseppe Spagnulo (1936 – 2016) was one of the most important sculptors of the present. Spagnulo manages to release red-hot iron from its seemingly inaccessible form using targeted intervention such as bending or buckling. Equally fascinating are his sculptural drawings: large-scale works on paper using ashes from the Stromboli volcano as a medium.

There have hardly been exhibitions with the theme of ‘Sculpture’ without Spagnulo since his participation at the documenta 6 in Kassel in 1977. He has been shown many times in German exhibitions, amongst others at the Nationalgalerie in Berlin in 1981, at the Lenbachhaus in Munich in 1982, and the Wilhelm-Lembruck-Museum in Duisburg in 1985, and at the Museum Ostwall in Dortmund in 1992. An extensive overview of his oeuvre can be found in the exhibition catalogue Palazzo Reale, Milano, 1997.
Between 1987 and 2002 Spagnulo was a professor at the Stuttgart State Academy of Art and Design.