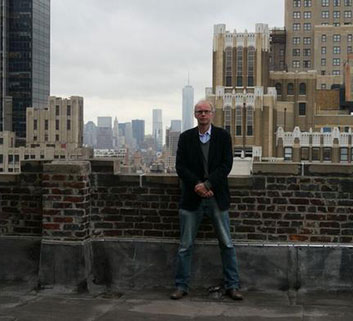 As a photographer Reiner Leist is not afraid to always accept new tasks and challenges, his projects are developed over many years. 1989 – 1993 Leist portrayed and interviewed over 200 people in South Africa, young and old, black and white, poor and rich. When it came to the question of how these photographs should be taken, the artist consulted with his portrait subjects. Through his questions, he let the people have their way and tell their own stories.
Photographs and texts are concentrated in an illustrated book called ‚South Africa. Blue Portraits‘, Nazareli Press 1993, with an introduction by Wulf Herzogenrath. It explains the country and its people within their social structure and political situation.

For 7 years, from 1994 to 2001, Leist travelled across the entire USA, visited more than 100 people and recorded their view of themselves, their life and their country. At every visit Leist asked for a picture from the subject’s childhood which he opposed to the one that he took. We presented ‘American Portraits’ in our first exhibition with Reiner Leist in 2001; the picture-stories are published in book-form by the Prestel Verlag.

His hugest project is ‘Window’. From march 1995 on Reiner Leist took a picture of the daily view out of his apartment window on the 8th avenue in New York. While doing so, he overlooked famous buildings like the One Penn Plaza, Madison Square Garden, the World Trade Center and the dignified New York Hotel. In 10 years more than 2,000 pictures were produced that way with an antique large format camera. Even though the angle of view always stays the same, his photographs diversify through the lively activity on 8th avenue, the changing climate and light-atmosphere and, of course, through the crash of the World Trade Center.
2006/07 the Museum für Fotografie in Berlin showed the complete Window-project in a spectacular staging. The compendium of the project ‘Reiner Leist. Window. Eleven Septembers. 1995-2005‘ with 249 illustrations was published by the Prestel Verlag. 2015 the Stadthaus Ulm presented 4 day-series from 1995-2015.

The Photo-artist (* 1964 in Ingolstadt) has been living in New York since 1994. 2000-2003 he had a teaching assignment at the MIT in Cambridge. Now he is a professor at the Hunter College of New York City University.